*The Champion pieces are published in FLAME Issue no.32 and are also reproduced here.

My cat, Tiger, I named him “Tiger” because he has striped fur, sharp teeth, and claws like a tiger. Sometimes, he tries to scare me with his mighty voice when I walk in.
I can always find him sleeping on my homework, toys, school bag, or wherever he feels comfortable. He likes to wake me up in the morning with his butt on my head. He loves to play with water bottle caps. He brings it back when I throw it.
He is like a best friend to me because he always stays by my side when I do my homework, read books, watch TV, or anything else. Sometimes I wish I could be a cat just like him and simply lay around all day.
​

Bong Chi Hin and Hinson tossed the dice, it read: moon, Canada, castle, DSXP, squirrel, ring, then they jumped into the hula hoop portal.
The moon was shining bright and they arrived in front of a castle in Canada. It was a blue, very tall and huge. There was a squirrel ring sparkling at the top of the castle.
The castle was too high for them to reach and there was no staircase nor elevator. Suddenly, a squirrel came and said, “I will help you to climb and you may have the squirrel ring”. The squirrel is blue, very big and friendly.
Unexpectedly, a monster called “DSXP” appeared, it was Gauwa’s little brother! Bong, Chi Hin and Hinson screamed and ran away. “Catch it” cried the blue squirrel. The blue squirrel threw the squirrel ring to Hinson and he put it on his finger. The squirrel ring started to play music and DSXP looked scared because it was afraid of music. DSXP flew away. The three young heroes thanked the blue squirrel for the ring and they had invited it to join their team. Its name is Pudding.
The fifth item found, a Squirrel Ring!
​

An Adventure in the Pyramid   ﻿MERIT﻿
Kyle Lee 1C

Coming out from the hula hoop, I, Chi-Yin, Hinson and Bong fell into a dark chamber of a pyramid. The banging sound awoke the sleepy mummy of Pharaoh, so he was very angry. He shouted loudly, “If you can’t solve the pyraminx, I will cast a spell turning you into strange creatures like spiders, scorpions and shakes.”
We felt so helpless and scared. I suggested to ask the mini robot for help and it enlarged itself. It played a pyraminx tutorial video on YouTube. We tried a few times, and we luckily solved the tricky pyraminx. So, Pharaoh let us leave the pyramid and gave us the pyraminx as a gift.
After walking out of the eerie and dark passage, we finally arrived at the hot desert. Suddenly, Gauwa appeared in the sandstorm. So Chi-Yin threw the dice. Hinson’s hula hoop glowed with purple light. We dove into it for escaping. To be continued... 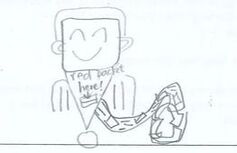 My sister is called Ella. She is five years old. Every Chinese New Year, my sister and I receive a lot of red packets from relatives, uncles, and aunties. We recycle the used red packets into the blue paper recycle box on the street. This year, we cannot go out because of the COVID-19 pandemic, so I designed angel red packet collector to let my sister recycle the red packets.
The red packet collector is a robot with a chubby human face. It has a pair of fluffy angel wings and a blue tummy. The tummy has a rectangle door in the middle. The door is electronic and will auto open for my sister to put the red packets into the tummy. When the robot tummy is full, it flies to the recycle depot and a pipe comes out from its tummy. Then the red packets go through the pipe and into the recycle box. I am sure my sister loves my gift because her favorite doll is an angel doll.

I have known my mum for six years. She has long, brown hair and big eyes. She always has a smile on her face.
My mum always picks me up from school. She always listens to me about my school life, and she laughs with me about funny things.
Somethings, I love to sleep on my mum’s bed. Her blanket is so warm and cozy. I always have a good dream when I sleep with her. Before we sleep, she always reads a story with me. I feel the story is so interesting.

One day, Bong, Chi-yin, Hinson and I were going to explore the sea bed by a submarine. We were so excited because this was our first time to ride a submarine which has two bright headlights allowing us to see clearly under the sea bed. Soon, we dived deeper and deeper. We saw so many amazing sea creatures through the window. Suddenly, there was a big shark with many sharp teeth staring at us outside the window. We were very scared and we hid inside a sea cave. The wall inside the sea cave was full of colorful jewels. It looked like we were in a miracle rainbow tunnel. We found a chest and we thought that this was a treasure chest. Then we dived to open the chest. “Oh no!” We exclaimed. There was a big jellyfish coming out from the chest. “It’s time to get up.” said Mum. Then I woke up. It was all a dream.

I want to give 3D Power Strong Mask to all my friends as a gift. It is circle and transparent, so no one can see it. It can emit light to kill all bacteria and virus.
It doesn’t have ear loops, so the ears don’t hurt. It can stick on the face by itself.
I want to share it with my friends because it protects my friends from Covid-19. We can play and go to school. We can see others’ face clearly too.